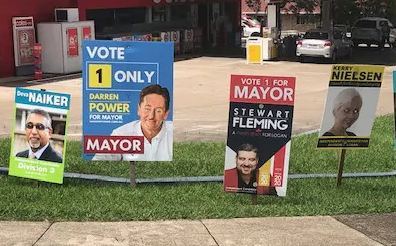 How Independent is your Candidate?

By now we have all seen the signs strewn throughout the City of Logan and on most of these signs is the words ‘independent candidate’.

But just how independent are the candidates in this local government election?

As polling day draws closer there are always accusations of big party influence in individual campaigns. They’re often denied. But that’s not information voters are always privy to.

Some candidates have known ties to major parties and unions, but they’ve all claimed to be running as “independent”, separate from their political ties.

It would be foolish to think that we can have any system of elections where everyone is completely separate from major political parties no matter what the candidate claims.

If you are politically minded you will have links to a party somewhere along the line. The difficult question is to what degree will this person truly be independent? Voters might be angry if they think they are voting for an independent and not one bound to the Labor Government, for example.

Candidates such as Kristy Peterson have come out completely admitting she is running as a member for The Greens.

Saying on her Facebook page I believe in The Greens 4 pillars.

“Resigning from the party wouldn’t mean I no longer believe in those ideals. It would simply mean that I was no longer prepared to stand up for those beliefs because I was afraid residents would judge me and not vote for me.”

Other candidates who are claiming independent have had state and federal Labor members at their functions and helping them door knock.

Many have criticised Queensland’s campaign disclosure laws because they don’t offer voters any insights before the fact. Any candidates aligned with or receiving donations from parties, unions or factions should let voters know before the election.

Fundamentally, I think when we the people go to vote in local government elections we are looking for individuals that are willing to work with people across the political divide and achieve outcomes.

Before you throw your hat in the ring to run for local government, be open and honest to the ratepayers you seek to represent and don’t hide behind the word ‘independent’ if you aren’t really.