Beenleigh Tennis is Under New Management

Club Beenleigh has been granted the lease by the Logan City Council and has vowed to breathe new life into a venue that has suffered from disrepair and failing patronage.

The appointment of Mike Newell, former Director of Tennis at the ATP International Headquarters, and coach of some of the world’s top ranked players, was an ominous sign for the future. Boasting an impressive coaching career throughout the world, USA born Mike says he is determined to make Tennis in Beenleigh great again.

“All junior coaching, cardio tennis, and current fixture programmes will continue under the watchful eye of our amazing coaching team,” he said.

“However, we will also be introducing many other new exciting programmes – including Pickle Ball, which has been sweeping the world over the last few years.”

The Grand Opening Carnival on February 3rd is a wonderful way to re-introduce the venue to the locals. There will be tennis displays from former Wimbledon champion Pat Cash, former Aussie Davis Cup Player Paul Hanley, and local rising star Alicia Smith – just to name a few.

For the kids, the Beenleigh Tennis Centre will be running free hot-shots lessons, under instruction from former head of the Queensland Tennis Centre, Mark Cook. 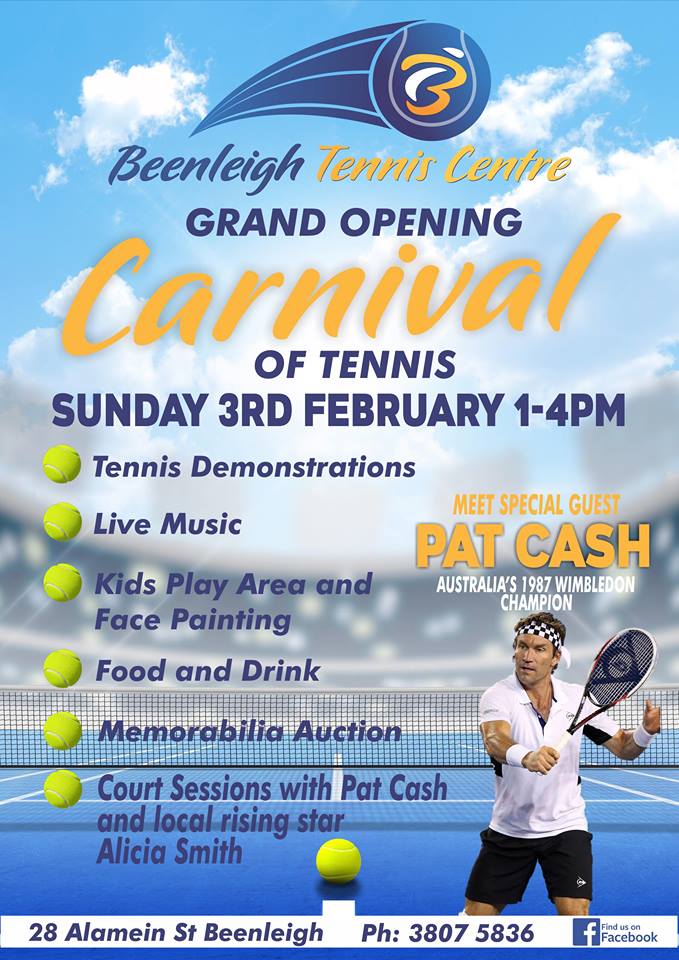 There will be a huge inflatable world for kids to play, as well as face-painting, balloons, and sausage sizzle. Live music will be performed by music legend Nik Philips, who will encourage Pat to grab a guitar and play along if the mood takes him.

Club Beenleigh will hold several competitions on the day – including signed Pat Cash chequered headbands if you and your partner can win two consecutive points from Pat Cash and Paul Hanley! Cash has also given a signed racket and headband which will be sold at Silent Auction. Hundreds of free court hire vouchers will also be given away.

Club Beenleigh board member Mark Ellis said that everyone is very excited at the new prospects and opportunities for the local tennis community.

“We are pleased that we can now move forward and unite sporting clubs and community groups under one management,” he said.

Mark, who was a previous President of Beenleigh Tennis Club is glad that all the controversy was now behind them.

“Tennis should be fun, and needs to be reported on the back pages of the newspaper – and not the front!”, he said.

The Grand Opening Carnival is a free community event and runs from 1pm-4pm on Sunday 3rd of February. Further information can be found on the Beenleigh Tennis Centre Facebook page.