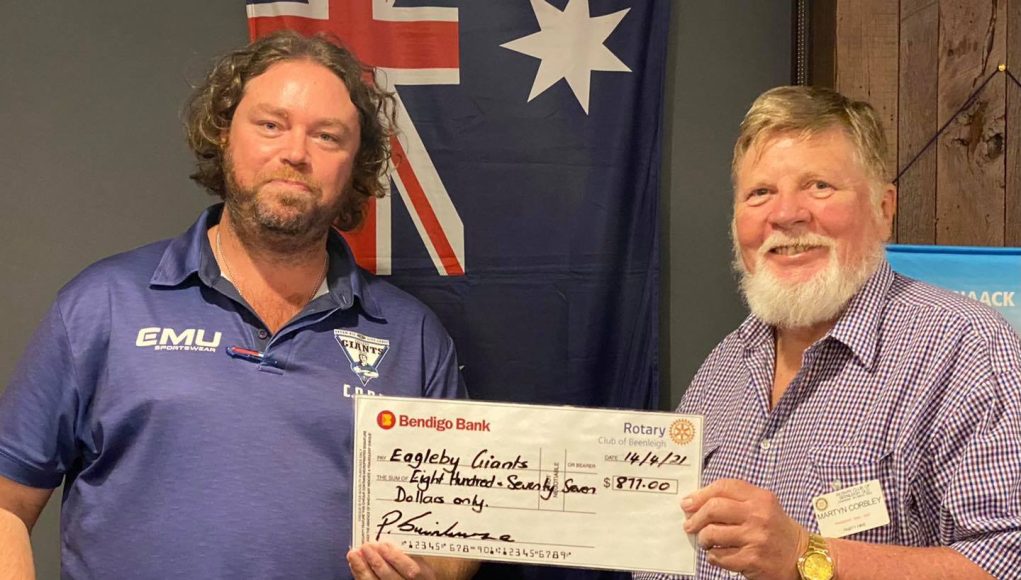 The Rotary Club of Beenleigh held a BBQ at Bunnings Bethania on March 13th and shared the day with the team from the Eagleby Giants Junior Rugby League Football Club.

The community did what they always do and bought plenty of snags, with the onion on the bottom of course, which has helped raise money for the growing Eagleby club.

President Martyn was back on deck at the Rotary Club and presented Chappy Nick from the Giants with a cheque for $877.

A Rotary Club of Beenleigh spokesperson said, “We hope this will go a long way in assisting their Giants community with plenty of fabulous things to make our community stronger.”

The Eagleby Giants have put in a huge effort in 2021 to grow the club and make their grounds known as a quality field to play on.

Large numbers from around the community have joined the club to form teams in most age levels with the opens men’s team spoiled for choice with players.

Chappy Nick said the Rotary Club of Beenleigh are an amazing group of community minded people.

“The Rotary Club of Beenleigh recently held a Bunnings BBQ and gave all the earnings to the Eagleby Giants JRLFC to help the club continue to support the local kids.

“Communities can only thrive when we work together and the Rotary Club of Beenleigh continually demonstrate this.”