Home Community Depression Among the Elderly 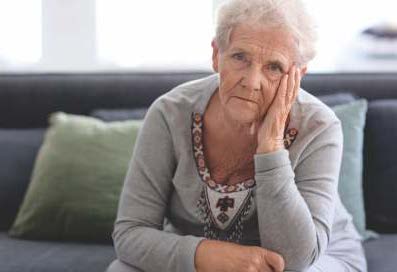 With summer behind us and the days growing shorter and cooler, many people—especially those who are elderly and homebound—can experience a bit of an emotional downturn. For most of us, this seasonal “sadness” is quite normal, and presents no cause for concern. But it’s good to be mindful of a few common symptoms that might indicate more serious depression, which can lead to bigger issues and be easy to overlook.

Depression affects one in five Australians, nearly four million people, and 18.4 per cents of those aged 65 or older, with prevalence being especially higher for seniors who are homebound.

Depression is not a normal part of aging. Depression interferes with daily life. Depression can often trigger a downward spiral that can result in a series of health issues. Many people suffering from depression never seek treatment. But the majority, even those with the most severe depression, can get better with treatment. Medications, psychotherapies, and other methods can effectively treat people with depression.

Research shows that 10 to 20 per cent of older patients seen by a primary care physician suffer from depression – and among the homebound, that figure may be as high as 46 per cent. Even more worrisome, the elderly represents 16 to 20 per cent of the nation’s suicide rate, with the highest suicide rates in males 85 years and older.

Depression in the elderly is frequently ignored because it is often mistaken for other aging-related illness or loss. Seniors themselves may ignore the symptoms, believing their suffering is a result of growing older and therefore they are expected to slow down. In addition, many seniors experience loss of social support systems due to the death of a spouse or siblings, retirement, or moving to a different home. Reactions to these losses may be misunderstood and not diagnosed as depression.

Physical conditions can further increase the risk of depression among the elderly. Certain medicines or combination of medicines have side effects that may contribute to depression, as does social isolation and living alone. As a result, effective treatment often gets delayed, leaving many elderly people to unnecessarily struggle with depression.

The most important thing is to help your loved one get an assessment, diagnosis, and treatment. There are many ways to effectively treat depression in the elderly, from cognitive behavioural therapy to medications.

Be observant – have a conversation with your loved one to further probe how they are feeling or what’s bothering them and listen carefully. Give them an opportunity to speak and listen to what they say.

Depressed older adults often talk about the physical symptoms of depression first; listen for statements like “I’m not sleeping well,” or “I’m just not hungry.”

Reassure them that with a little help, they can enjoy life again. And talking about it is the first step. Keep in mind they may be holding back because they don’t want to create an additional burden for the person who is caring for them.