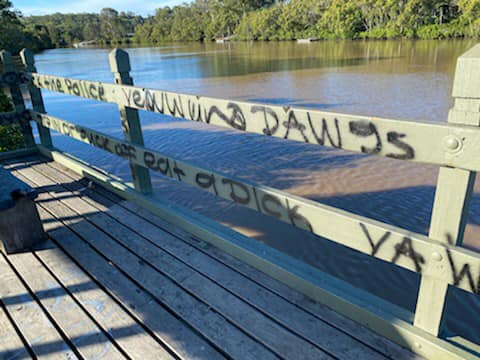 Sometime between 10pm Friday 22nd and 9am this morning some scoundrels have vandalised the Eagleby wharf, again.

A local resident stopped by the wharf and found the destruction and contacted Logan City Councillor Karen Murphy for Division 12 who ventured to the sit to see the damage herself.

For the third time in six months, the wharf on Wharf Road in Eagleby has been attacked. The first time the wharf was burnt, the second was graffiti and now it has both and more.

In black paint they have written F**k the police, your daughter calls me daddy and numerous other disgusting comments and they have drawn a swastika. This was not enough for them as they didn’t stop there. They lit a fire on the wood surface and knocked down a complete fence that runs along the pathway.

Cr Murphy for said come on Eagleby, let’s put an end to this sort of behaviour.

“It’s disappointing that this occurs for no reason,” said Cr Murphy.

“The constant repairs are an expense ultimately footed by the ratepayers which could be better utilised in Eagleby.

“I have reported this through to the local police and Council officers.

“This is the third time I have had to repair the wharf in the last 6 months and It is getting beyond a joke.