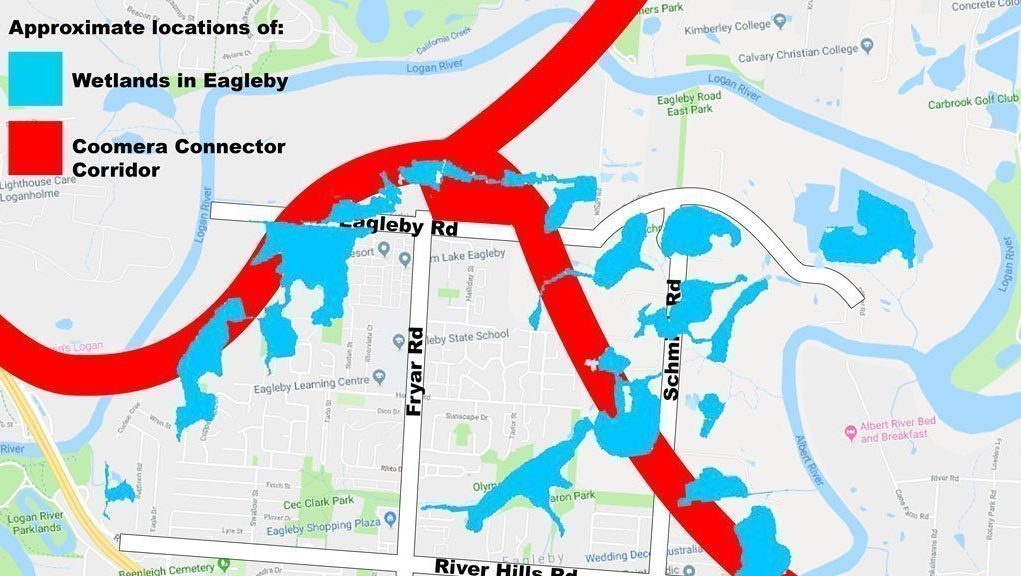 The Labor Government have decided that the Eagleby Wetlands are not worth protecting as the Department of Transport and Main Roads (TMR) has advised they will proceed with the second stage of the Coomera Connector.

The Eagleby Community and Wetlands Group, who have been fighting hard to protect the wetlands, said they were informed that TMR plan to proceed with the road around Eagleby as presently gazetted.

“We are very disappointed that Eagleby voices have not been heard.

“There will be further “community consultation” but that may not bring about changes.

“Before anything is commenced, the Federal Government would have to ensure that a road does not interfere with any of the specific criteria in the EPBC ACT.

“We believe Eagleby is so special that it meets several of the nine points that must be considered and which could lead to approval being denied.”

Member for Forde, Bert van Manen, is extremely disappointed by these reports despite the road’s potential impacts on the Eagleby Wetlands.

Mr van Manen said, “I have lived in this community for my entire life, and I treasure the Eagleby Wetlands as much as everyone in our community. While I appreciate the need for the Coomera Connector, I will never support a road that negatively impacts our ecologically significant Wetlands.

“TMR have told the Eagleby Community Wetlands Group that the road will proceed as gazetted. Given this, it seems odd that TMR’s website states that public consultation on the assessment of alternative alignments for the Coomera Connector near Eagleby is open for comment until Wednesday 30 June 2021.

“State Member for Macalister, Melissa McMahon needs to talk to her Minister to clarify the department’s position – have they made a decision or not? And if they have, then why are they wasting time and money holding pseudo consultations?”

Mr van Manen continued, “I have been in communication with the Federal Minister for the Environment about protecting Eagleby Wetlands. There is scope for Stage 2 of the Coomera Connector to be assessed under the Environment Protection and Biodiversity Conservation Act 1999 (EPBC Act).

“Referral under the EPBC would see a full assessment of impacts to matters of national environmental significance. If surveys demonstrate there are at least 18 individuals of Latham’s Snipe and/or at least 15 species of migratory shorebird at the Eagleby wetland site, then the Australian Government would consider it ‘nationally important habitat’ for listed migratory species.”

Given the State Government’s decision and the ongoing concerns of the community, Mr van Manen will seek to arrange a pre-referral meeting between the Eagleby Wetlands Group and representatives from the Federal Department of the Environment.

Transport and Main Roads Minister Mark Bailey said we gave a commitment to the community to rigorously investigate six alternative alignments for the northern section of the Coomera Connector.

“I thank the community members who put their time and effort into that process.

“All options for the Coomera Connector’s northern section were located within the Logan and Albert river catchments.

“Concerns have been raised by some community members about the preferred route’s impact on the wetlands next to Eagleby,” he said.

“To avoid those impacts, one of the alternatives put forward by the community was to build the new road further east, through Gilberton and Alberton area.

“Assessments found that option would impact a larger portion of more environmentally sensitive areas, including RAMSAR wetlands to the north of the Logan River and a Koala Priority Area.”

Mr Bailey said the community would continue to be closely involved in planning for the future road connection.

“We’ll hold at least four community information sessions at Beenleigh, Cornubia, Carbrook and Eagleby, as well as letterbox the local community to explain the findings of the independent route assessments,” Mr Bailey said.